A preliminary written report by McDonald Fleming Moorehead for Escambia County places the blame for the Escambia County jail gas explosion that killed two inmates and paralyzed a corrections officer on the contractor.

Because we are representing 80 injured victims in the April 30 natural gas blast at the Escambia County Central Booking and Detention Center, the firm wanted to share this crucial information with the public along with other important facts uncovered by Michles & Booth investigator Duwayne Escobedo.

The McDonald Fleming Moorehead report never mentions the contractor—A.E. New Jr. Inc.—by name. However, the county awarded the Pensacola contractor the $1.7 million job to redo the basement, as the low bidder in December 2013.

The report asserted that A.E. New Jr. Inc. failed to bolt commercial gas dryers to the floor in the flood-prone basement of the jail facility as its contract with the county required. Witnesses reported a video recording showed the dryers were floating as rain waters eventually rose about six to seven feet in the laundry room in the basement, according to the report. This caused loosening or breaking of the natural gas lines and the leaks, although the report admitted that they were not able to verify this through “physical evidence” because the firm’s investigators were not provided access to the basement given the building’s instability.

The report concluded the 11:20 p.m. Wednesday, April 30 explosion was caused by A.E. New Jr. Inc.’s “failure to bolt commercial gas dryers in a flood-prone basement to the floor despite contract specifications that instructed the contractor to ‘bolt, level and group all equipment as necessary.’”

It also stated: “The negligence of the contractor for failing to bolt the dryers to the floor may be imputed to the County, but the County has the right to indemnification from the contractor.”

Interestingly, the report fails to mention that the county’s bid solicitation, “Scope of Work Summary,” did not ask for electrical or natural gas equipment to be relocated above ground. This is contrary to Sheriff David Morgan’s recommendations. After experiencing similar flooding in June 2012, Morgan urged all those functions to be moved above ground.

The county said in a May 20 statement that those improvements were “not considered cost feasible” and it planned to mitigate flooding with the addition of a wall and pumps to the bottom floor of the building and the addition of retention ponds to the jail property. However, those measures were not completed before the natural gas explosion destroyed the jail facility.

McDonald Fleming Moorehead, which was paid nearly $14,600 for the preliminary investigation, said it interviewed 16 eyewitnesses. Based upon its investigation, it theorized that during a similar June 2012 flood the commercial gas dryers were bolted down since they were not displaced.

It is well known within the industry that such dryers must be bolted in flood hazard areas and that building codes, in fact, require it, according to the preliminary report. Although, the report said the jail facility is not in an area designated as a flood hazard, “the contractor had actual knowledge that the basement was prone to flooding, and thus knew or should have known that bolting of the dryers was ‘necessary’ to avoid a gas leak.”

It’s not the first time gas dryers have caused such a tragedy. A 2004 federal case from the Eastern District of Pennsylvania involved floodwaters entering the laundry room of the Village Green Apartments in Philadelphia County. The Complaint in the underlying cases filed in state court in Pennsylvania stated that the flood waters lifted the gas dryer off the floor, breaking the gas pipe and resulting in an explosion that killed six tenants and injured six other tenants.

On Duty County Employees Were Unaware Of The Gas Leak

In addition, the report done for Escambia County strongly defended county employees, saying there was “no evidence” any of them knew the dryers were not bolted in place.

Shift Commander Lt. Joe Ryals and Lt. Roberta Varvorine, who were on duty at the time of the explosion, both testified to the firm that they were unaware of any gas leak prior to the blast. “It defies logic to think these officials [would] have ignored the smell of gas, or reports of the smell of gas, in the very building in which they were working at the time of the explosion,” the report said.

Next Step –  Presenting The Evidence To The Escambia County Grand Jury

Currently, the State Attorney plans to present evidence it has collected in its investigation to an Escambia County grand jury to decide whether criminal charges are warranted. The U.S. Department of Justice’s Bureau of Alcohol, Tobacco, Firearms and Explosives (ATF), Florida State Fire Marshal’s Office and State Attorney have not indicated when the results of their investigation will be made public.

You can count on the Michles & Booth firm to continue to follow this horrific jail explosion very closely and report any updates we uncover to you on this blog. 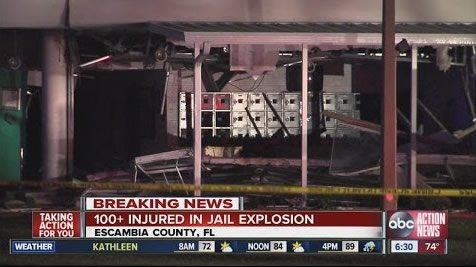