Injured in Fort Walton Beach? At Michles & Booth, You Will Not Be a Victim Twice.

At Michles & Booth, our personal injury attorneys in Fort Walton Beach are committed entirely to representing victims of negligence. Unfortunately, injury victims are also often taken advantage of by large insurance companies working to avoid paying out claims. Before speaking to anyone from the other person/party’s insurance company, reach out to Michles & Booth to discuss your case.

Our Fort Walton Beach location has a full staff of attorneys, legal assistants, investigative experts, and other law professionals dedicated to assisting you with your case.

Our areas of practice include:

Helping You Avoid Being a Victim Twice

The team at Michles & Booth can begin working to protect your rights immediately by building a solid case on your behalf. We work with a team of investigators, board-certified medical doctors, and other experts in order to better support our clients’ claims. In every case, we seek the maximum compensation our clients are owed.

Whether you were involved in a car accident, suffered harm due to a doctor’s mistake, were injured on the job, or need help appealing a denied SSD claim, Michles & Booth is ready to help.

In 2012, Michles & Booth announced the relocation of its Fort Walton Beach office to 400 Racetrack Road, a move from its original location by Brooks Bridge, which was already distinctive thanks to the patriotic mural covering the building’s exterior wall. Following the completion of the new Fort Walton Beach office, a newly-designed patriotic mural was commissioned to cover the east wall as a continuing tribute to the military, law enforcement, and first responders. The revised mural design was conceived by Marcus J. Michles II of Michles & Booth and sketched to his approval by nationally recognized artist Eric Henn, and painted in exact detail by Eric Henn Murals in 2013. The patriotic mural was dedicated to the community in a special ceremony hosted by Michles & Booth in conjunction with the Michles Family Freedom Foundation on April 11, 2014. 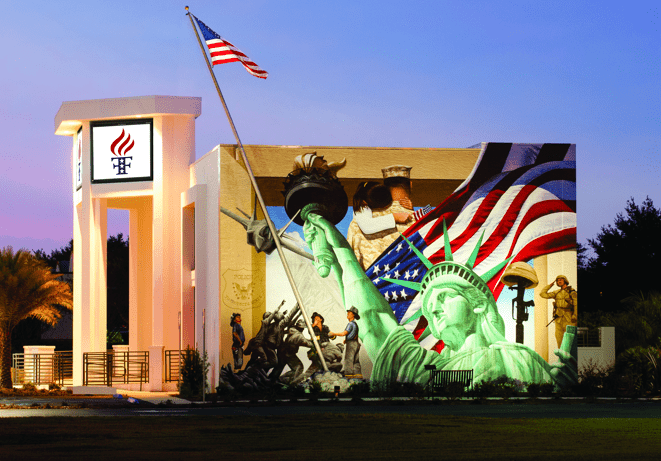 If you've been harmed by the negligence of another person, the first step is to reach out to an experienced attorney who can help you with your case. Call (800) 848-6168 for a free consultation with a Fort Walton Beach personal injury attorney at Michles & Booth.